Placed in the prime spot in the suburb of Laoag, St William Cathedral holds the seat of the Roman Catholic Diocese. The creamy facade and pillars is the focal point of the Cathedral.It was constructed in 1612 by Augustinian Friars the church surpassed numerous earthquakes and hurricane. 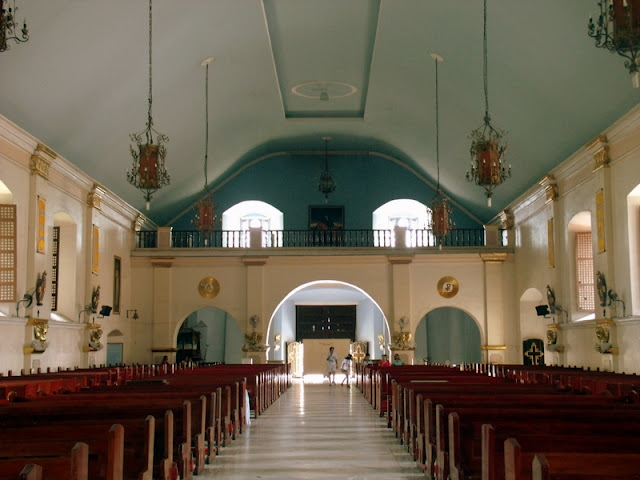 The interior is also well kept.The capiz shell windows  serves as ventilation inside the church.I spent 15 minutes observing the features and staring on the  Retablo. So far,  the St William Altar is the most adorned altar I saw in my entire tour in Ilocos Norte.

Across  the street  is the Bell Tower of Laoag.I did not feel anything special about it aside from the fact that its sinking.  It is located amidst the busy street and its quite hard to get a good shot.
After Laoag Church we headed to the famed Fort Ilocandia. The location is quite far from the city center. The roads that leads to the hotel are narrow with few houses along the way.Fort Ilocandia is facing  the  South China Sea  and  is surrounded by  vast sand dunes. Tourist are  allowed  to enter the hotel grounds.  The lobby is a bit unconventional as part of it is alfresco. There is a lonely chandelier that lights up the lobby.  As you move further into the alfresco part of the lobby (serves as "Kapihan" to the guest), you will then be ushered into a well manicured garden with statues scattered all over it.

There are no entrance fees in Fort Ilocandia however, the access is limited for non staying guests.I went to Fort Ilocandia via van and I i haven't see any public transportation in the area.

Oh I love the capiz windows of the church!

are the recreational areas open for non-staying guests?